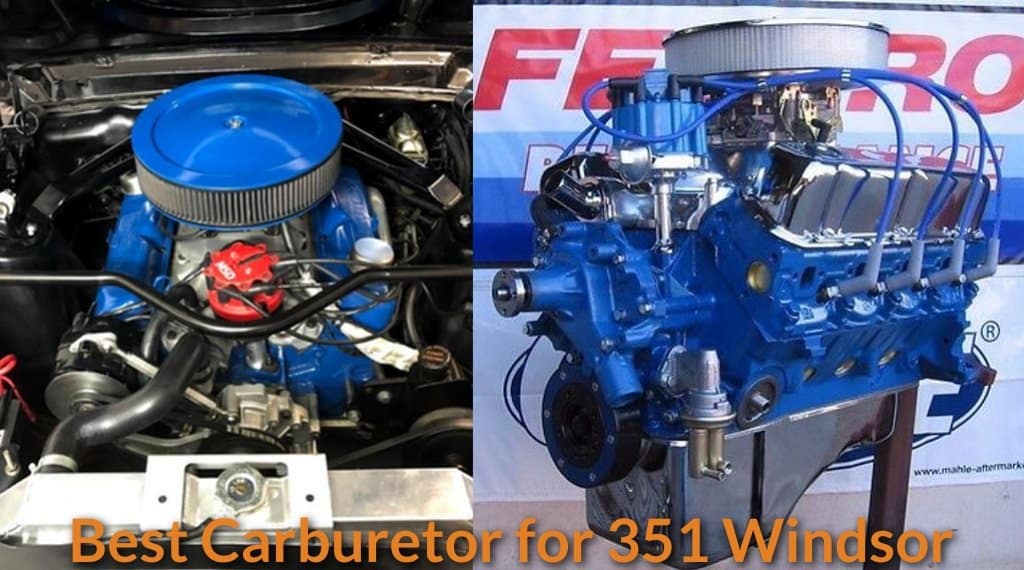 One of the longest-serving types of engines produced by Ford Motor Company is the Ford Small Block 351 cu in (5.8 L). This engine comes in a series of automobile V8 engines. But it was first rolled out by Ford in July 1961. It stayed in use until its use for trucks was discontinued after 1996. Later in 2001, its use was also discontinued for new SUVs (Explorers).

Ford did not name this series of engines. But to distinguish it from the Cleveland 335-family engines, it was called “Windsor.” Though introduced in 1961, it was only in 1962 when it was completely uncovered. It was then used for Mercury Meteor and Fairlane Models.

This engine succeeded the Ford Y-block engines. At the onset, it has a displacement of 3.6 L or 221 cu in. Afterward, its displacement was increased to 5.8 L or 351 cu in. It was also marinized for smaller recreational boats.

Carburetors that are Recommended for 351 Windsor

If you are still using a 351W, you can still buy a carburetor for this model. Here are some of the aftermarket carburetors that you can buy as replacements for your engine’s carburetor:

You can directly replace your old broken carburetor with this one. It fits perfectly well, and its shafts are really tight. Moreover, it needs minimal adjustments. You should run this carburetor with a fuel filter before the inlet 1.08 Venturi 0.049 jets. It also comes with a mounting gasket and seal.

It is perfect for engine models of Ford 289, 302, and 351. It also fits well with 360 engine models. You should make sure, however, to check the fitment table before you buy or replace the carburetor of your engine. This two-barrel carburetor replacement will generally fit the following models and makes of engines:

This Mophorn Carburetor is equipped with a mounting gasket and seal. It also has a universal fit for different applications. Yet, before you install it, you should ensure that you have already cleaned the oil channels. If you have the 424 CFM, you need to get the 1.33-inch Venturi Model.

As the standard stock replacement model for any 351W model, this carburetor model will fit the following engines:

The AutoHorizon 2 Two Barrel Carburetor is a Ford Autocraft 2100 Replica. It features a 154 twin-barrel design. It is considered a universal replacement part for different engine models. It also features a 1.14″ venturi size.

The AutoHorizon 2 Two Barrel Carburetor delivers 300 CFM. This replacement part features a casting that is made of zinc and aluminum. Before installing, you should ensure that you have already cleaned the oil channels.

You need to get a 1.33″ Venturi Model if you have 424 CFM. The AutoHorizon 2-Barrel Carburetor comes with a one-year warranty. This carburetor replacement fits the following engine models perfectly:

Additional Information You Should Know About 351 Windsor's Engine & Carburetor

The 351W is different from the 351 Cleveland, although both have identical displacement. Moreover, it should be distinguished from the 302 because it has a taller deck height. It is very much related to 289-302 in terms of configuration.

The 351W shares almost the same motor mounts, bell housing, and other small components with the abovementioned engines. Yet, it is unique because it has a tall-deck block and larger main bearing caps. It also has thicker and longer connecting rods.

Plus, it has a distinct firing order (1-3-7-2-6-5-4-8 against 1-5-4-2-6-3-7-8). This enables it to lessen the excessive load on the main bearing. Its distributor likewise differs slightly. This is because it can accommodate a bigger oil pump shaft along with a larger oil pump.

Another unique feature of the 351W is its head. Its head optimized torque with high-rpm breathing. Yet, this head is often replaced with aftermarket heads by enthusiasts. They do this to get better performance from this engine.

Throughout the years, the heads had evolved. The Early 1969 and 1970 heads carry larger valves as well as larger ports. From 1969 to 1976, however, the head castings and the sizes of valve heads were also different. In the 1977 models and onward, the 351W sported an identical head casting as that of 302 with a minor difference in bolt hole diameters.

Early blocks, likewise, had sufficient metals on their bearing saddles (2,3,4) for 4-bolt mains. Thus, they exhibit superior strength as compared to most late model castings that were lightweight. The 1969 to 1974 models were considered far superior and stronger than succeeding blocks. Thus, they were highly desirable than the succeeding SBF engines.

In the 1990s, there was a change from speed density to mass airflow (MAF). This change radically affected the performance of the engines. Prior to 1994, 5.8L engines were equipped with speed density. Speed density is a program coding that the vehicle’s computer has. It tells the motor the amount of air it should get. With this programmed code, the motor gets the appropriate fuel amount.

However, in 1994, MAF was introduced. Through this program, the computer could read the amount of air that the engine receives via a sensor. Hence, the computer could then increase the fuel amount that an engine gets once the airflow is raised. This led to better performance of the engine. Without this mechanism, 5.8 L engines will not perform better.